(Jonesboro, Arkansas) www.hytrol.com July 17, 2017— Hytrol is pleased to announce its participation in the Made in America product showcase on the White House lawn today from 2 to 4 p.m. ET. The company was invited to represent the state of Arkansas in the showcase, which highlights American-made products and manufacturers.

The event was created as part of President Donald Trump’s “Made in America” week, which promotes products made in the United States. Hytrol was in the company of other American industry leaders like Sikorsky Aircraft, Caterpillar, Campbell’s®Soup and Steinway & Sons. 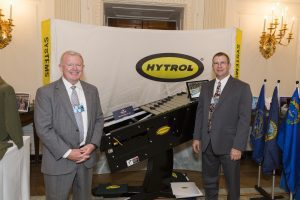 “It was an honor to have been selected to represent the state of Arkansas in this event,” said Peacock. “We’re

so proud at Hytrol to continue to invest in our community and in our country by keeping jobs here, and we believe that’s an essential piece of what makes our company so successful.”

Hytrol is the largest material handling manufacturer in North America. The company, based in Jonesboro, Arkansas, has over 1200 employees and it recently invested nearly $18 million into a facility and capacity expansion initiative. It recently celebrated its 70th year in business and is projected to surpass its goal of $200 million ahead of schedule.

President Trump is expected to issue a declaration as part of “Made in America” week on Wednesday.

Established in 1947, Hytrol has demonstrated an unwavering dedication to understanding the unique material handling needs of businesses. From traditional roller and gravity conveyors to the most advanced conveying system technologies such as 24-volt conveying solutions and logic-driven zero-pressure accumulation, Hytrol seeks to create the most value possible for its customers.

Hytrol believes that these solutions are only as good as the people behind them. Hytrol works with a network of integration partners to implement solutions for customers across the globe. The company’s emphasis on the “Hytrol Family” mindset continues to make Hytrol a great place to work as well as a mainstay of the company’s respected position within the material handling industry.