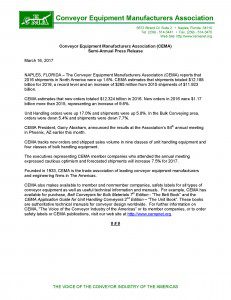 NAPLES, FL – The Conveyor Equipment Manufacturers Association (CEMA) reports that 2016 shipments in North America were up 1.6%  CEMA estimates that shipments totaled $12.188 billion for 2016, a record level and an increase of $265 million from 2015 shipments of $11.923 billion.

The executives representing CEMA member companies who attended the annual meeting expressed cautious optimism and forecasted shipments will increase 7.5% for 2017.

Founded in 1933, CEMA is the trade association of leading conveyor equipment manufacturers and engineering firms in The Americas.